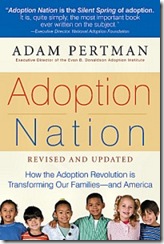 Adoption Nation: How the Adoption Revolution is Transforming Our Families – and America (The Harvard Common Press, April 2011, 352 pages, ISBN 978-1-55832-716-0, $16.95 paperback) takes on the challenge of explaining the historic changes enveloping us all – and does so with a unique combination of engaging prose, gripping stories, insightful perspective and exceptional research.

Its author, Adam Pertman, is one of the most influential experts in his field and Adoption Nation has been called “the most important book ever written on the subject.”

Inspired by his Pulitzer-nominated series while a reporter with the Boston Globe, the first edition of Adoption Nation (2000) captured an important piece of U.S. history and was a game-changer for child welfare professionals, policy-makers, and members of what Pertman calls “the extended family of adoption” (adopted individuals, birth and adoptive relatives).

The new, fully revised edition updates the “adoption revolution” with all of its joys and disappointments, its personal and policy issues, its complexities and controversies.

“There’s no exaggerating how much has occurred over the last decade – from the adoptive mother who recently ‘returned’ her son to Russia, to the children orphaned by the earthquake in Haiti; from the ongoing debate over transracial adoptions, to the still-unregulated Wild West of adoption on the Internet; from the decline in secrecy and shame in adoption, to the explosion of reunions between adopted people and their birth families; and from the precipitous drop in international adoptions to the soaring rise in adoptions of boys and girls from foster care, including by growing numbers of gay and lesbian parents,” said Pertman. “When I looked at the landscape, I felt compelled to do a thorough rewrite of the stories, of the research and of the phenomenon itself.”

More comprehensive, more up-to-date, more moving – and more useful – than any other book on the subject, the new edition of Adoption Nation is an invaluable resource for prospective and current parents and their children. And it is a passionate call-to-arms for equality and social justice, as well as a unique tool for educators, policymakers and professionals. 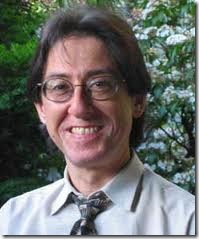 ADAM PERTMAN is the Executive Director of the Evan B. Donaldson Adoption Institute, the pre-eminent research, policy and education organization in its field. A highly sought-after speaker, Pertman has delivered hundreds of keynotes, trainings and other presentations internationally, and is the recipient of many awards for his work. He is the Associate Editor of Adoption Quarterly and has contributed to numerous publications on family issues. Pertman is widely quoted by journalists and has appeared as a guest on “Oprah,” “Today,” “The View,” “Nightline,” among other national programs. Before embarking on his current career, Pertman was a senior journalist with The Boston Globe for over two decades. He is a member of the Council on Contemporary Families, the editorial advisory board of Adoptive Families magazine, the National Adoption Advisory Committee of the Child Welfare League of America and the Advisory Board of Orphans International, among others. He lives in Massachusetts with his wife and their two children. Learn more at www.adampertman.com.

Heidi Says . . . as an adoptive parent myself, I was anxious to the opportunity to see and review this book.  I had never seen the previous version of it, so don’t have anything to compare this edition to, but this  book is BIG and FULL.  It’s divided into 3 main sections (each section containing 3 chapters):

NOTE: I received a free copy of this book in order to write this post. I was not influenced in any way nor did I receive any further compensation. The giveaway copies will be provided by the publisher.