This week, the
Christian Fiction Blog Alliance
is introducing
The Anniversary Waltz
Realms (May 15, 2012)
by
Darrel Nelson

At their sixtieth anniversary party, Adam Carlson asks his wife, Elizabeth, for their customary waltz. After the dance they gather the family and share their story—a story of love and courage overcoming adversity and thriving in the face of overwhelming odds.

It’s the summer of 1946, and Adam has just returned from the war to his home in Reunion, Montana. At a town festival he meets Elizabeth Baxter, a young woman going steady with his former high school rival and now influential banker, Nathan Roberts.

When Adam and Elizabeth share a waltz in a deserted pavilion one evening, their feelings begin to grow and they embark on a journey, and a dance, that will last a lifetime.

If you’d like to read the first chapter excerpt of The Anniversary Waltz, go HERE. 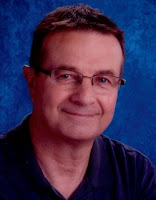 I am a schoolteacher by profession and have taught school for (thir—ahem!) years. I grew up in Raymond, Alberta, and attended the University of Lethbridge after graduating from high school and serving a two-year mission to Japan. During university, I met and married Marsha Smith, and we are the parents of four children, which has grown to include their spouses and our ten grandchildren.

I have always loved to write. I started writing stories before I was old enough to realize I was writing stories. It seemed a natural thing to pick up a pencil and paper and create a world simply by using words—worlds of adventure in steaming jungles (Tarzan was an early influence on me) or realms of adventure in outer space (Buck Rogers). But as I have grown older, I have discovered that the real inspiration for me is exploring the theme of love and how it can make such a difference in the world.

I’ve had an article published in Lethbridge Magazine and have written several dramatic plays, two of which won provincial recognition and were showcased at a drama festival. I won the CJOC radio songwriting contest two years running, and have had one of my songs receive international airplay. I have written four novels intended for the juvenile market. They are unpublished as yet, but I read them annually to my fourth grade students and my students tell me they love them, the darlings.

Heidi Says . . . When this book arrived in the mail, my daughter Ashley said “Why would you order a book that is written by a man?  I never like those as much.”  I explained that the book description just sounded really good to me.

I just finished the book last night and I just had to tell her “I told you so!”  This book was really, really good.  It starts and ends with a couple – Adam & Elizabeth – celebrating their 60th anniversary.  But, in between, we read their story of meeting, falling in love, tragedy, and finally marriage.  And, it’s beautiful.

I would never have guessed that this is Darrel Nelson’s first novel.  It’s very well-written.  I will definitely be watching for more of his books!