In December of 2006, my mom and I were in Vietnam adopting Ian.  The only way we had to communicate with those back home was via e-mail (that might not be entirely true, but I’ll confess that hearing the girls’ voices on the phone would have reduced me to a big ball of homesick mush – so I opted for e-mail communication only).

I recall sitting down at one of the computers in the hotel lobby, and seeing an e-mail from Brian about Shaohannah’s Hope (now called Show Hope).  We had applied for a grant months earlier and had pretty much assumed we hadn’t been chosen.  But, while I was 1/2 way around the world, Brian received the letter that we had been chosen.  Could the timing have been any more perfect?!  It was a total God-thing.

I remember applying for the grant and feeling such a connection with the Chapman family.  Anyone who has adopted probably knows what I mean.  Adoptive families just somehow connect with other adoptive families (I also see this in the homeschool community).  There’s a shared bond there.  I had followed them through their own adoption journeys.  I appreciated seeing them as “real” people and not so much famous, out-of-reach people.

About a year after returning home with Ian, we were invited to help work in a Shaohannah’s Hope booth at a local venue where Steven was performing.  We jumped at the chance, even being told that we wouldn’t get to meet him.  After all, we had received a grant from them, and this was a great opportunity to give something back.  We had forgotten to take our camera with us, so grabbed a disposal on the way – just in case.  As it turned out, we did get to go backstage after the concert and meet Steven!  (that’s the short story) 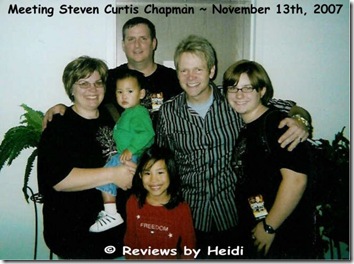 I was amazed by how down to earth and genuine he was.  It was late and we were all tired – I’m sure he more than the rest of us, after having just performed on stage for hours.  But, he took the time to interact with all of us – right down to noticing Gracie’s shoes and commenting that his daughter had the exact same pair!  I asked if they shop at Target and he said “all the time!”

When their sweet Maria went home to be with Jesus, I wept for their family.  I felt as though I had lost a part of my own family and I couldn’t even begin to fathom the depth of their pain and suffering.  What a tragedy!

This past Mother’s Day, Ashley blessed me with Choosing to See by Mary Beth Chapman.  Can I just say “WOW!” What a great book!

Grief is a journey many of us take at one time or another. For the Chapman family their journey began with the accidental death of their 5 year old daughter, Maria Sue, whom they adopted from China. In Choosing to SEE, Mary Beth Chapman shares her struggles with the tragic loss of Maria Sue, her journey to heal, and the unexpected path God has placed her on. Even as difficult as life can be, Mary Beth and the Chapmans choose to see with faith and hope. Foreword by Steven Curtis Chapman.

“I’ve told my kids for years that God doesn’t make mistakes,” writes Mary Beth Chapman, wife of Grammy award winning recording artist Steven Curtis Chapman. “Would I believe it now, when my whole world as I knew it came to an end?” Covering her courtship and marriage to Steven Curtis Chapman, struggles for emotional balance, and living with grief, Mary Beth’s story is our story–wondering where God is when the worst happens. In Choosing to SEE, she shows how she wrestles with God even as she has allowed him to write her story–both during times of happiness and those of tragedy. Readers will hear firsthand about the loss of her daughter, the struggle to heal, and the unexpected path God has placed her on. Even as difficult as life can be, Mary Beth Chapman Chooses to SEE. Includes a 16-page full color photo insert.

I just absolutely devoured this book! I so appreciated Mary Beth’s openness and honesty.  She shared things that I know had to be very difficult to share.  But, in doing so, she made herself very real.

The Chapman family has suffered great loss.  And the pain is still very fresh and still very much affecting their daily lives.  But, it’s so great to see them laying their lives at the feet of Jesus and their willingness to serve God through their pain.  I believe that God is using this entire family in a mighty way.

While this book will be of particular interest to those who have adopted and/or those who have suffered loss, I believe that everyone would gain by reading it.  I know I sure did!  And the bond I felt with this sweet family before has deepened.  I don’t know that I’ll ever have opportunity to meet any of the rest of the Chapman family in this lifetime, but I’m planning a big hug for Mary Beth when we meet in heaven.  And I’m looking forward to seeing their sweet Maria Sue (I wonder if she’s hanging with my friend Sue?)!