I love music.  I love Christmas.  So, it makes perfect sense that I really love the combination of the two – Christmas Music! Each year, we try to add at least one new Christmas cd to our collection.  And, each year, I think how the Christmas music season just doesn’t last long enough! So, I’ve been known to dig out my collection early and start listening.

Lately, we’ve been listening to some new Christmas cd’s in the  van.  I’d like to tell you about them (then, offer a giveaway, so that you can enjoy them as well!) 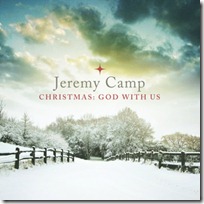 GRAMMY-nominated and BEC Recordings’ artist Jeremy Camp has released a Christmas project this holiday season titled Christmas: God With Us. This is Camp’s first full-length Christmas project in his 10-year career. The album is produced by Brown Bannister and Ben Shive along with Camp. Camp’s Christmas album is filled with holiday classics as well as the original title track “God With Us.” Fans will hear favorites such as “Jingle Bell Rock,” “Joy To The World,” and “Mary Did You Know.” Although these are traditional songs, Jeremy takes a fresh approach to the arrangements on his album.

Heidi Says . . . I am really enjoying this album!  Jeremy has a rich-sounding voice and gives these traditional songs a bit of a country-flair.  I don’t think there are any songs on the album that I don’t like.  I’m especially fond of “God With Us” – a song that Jeremy and his producers wrote together.  I think it’s hard to write a Christmas song that rivals the greats of old; but this one is excellent.  Its easy to pick up on and sing along with.  I’m sure this album will be a family favorite. 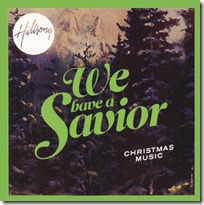 This Christmas, our friends from down under, Hillsong, bring us an album full of inspiring and festive songs soon to become Christmas classics. The seasons may be flipped with December falling in the middle of summer for Australia and there may not be snow, sleigh rides or “chestnuts roasting by an open fire”, but there is a common love for a baby born in a manger over 2,000 years ago. God incarnate. God amongst us. The greatest reason to sing this year and every year – sun or snow.  The first Christmas album from Hillsong in over 7 years features last year’s popular radio single “Born Is The King”, new arrangements to classic Christmas hymns as well as brand new songs to help keep our minds and hearts focused on the true reason for the season.

Heidi Says . . . Of the 3 albums that I received, I expected this one to be my least favorite, but I honestly don’t have a least favorite – I like them all for very different reasons.  I really enjoy listening to the voices of Hillsong on this album.  “Born Is The King” is a particular favorite, and I know I’ll like it even more when I’ve committed it to memory and can sing along.  I haven’t had this album as long, but I know we’ll all enjoy listening to it throughout the holiday season! 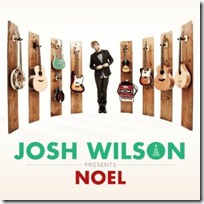 Rising singer/songwriter Josh Wilson releases his first full length Christmas album, “Noel”, this October as a follow up to last year’s hugely successful Christmas tour (Noel: A Unique Christmas Experience) and the #1 Christmas single of 2011, “Jesus is Alive”. Known for being one of the top songwriters and multi-instrumentalists in the industry, Wilson has been hailed as “the future of Christian pop” by media and his albums are regularly named to Year-End Top Ten Album lists. He has released numerous No. 1 hits including “Savior Please” and the powerful track “Before the Morning,” which landed the No. 4 spot on Billboard’s Year-End Christian Songs chart.

Heidi Says . . . I’ve been a fan of Josh Wilson since I heard “Before the Morning” several years ago.  The message behind that song really met me where I was at the time.  Immediately upon popping Noel into the cd player, you can tell that it’s classic Josh Wilson.  He has a very distinct sound, which I love!  His voice is so friendly and makes me feel like I’d like him just as much in person!  The 2 instrumental works on this album are great.  There are also 2 duets – one with Mandisa that is a lot of fun!

NOTE: I received the cd’s mentioned above for free, in the hopes that I would share about them on my blog.  I only share things that I personally use and think would be a good fit for my readers.