Thanks to smiley360 and Redbox, my family had an entertaining weekend! We were so well-entertained, in fact, that I realize now – after  the weekend has almost come to a close – that I totally forgot to take out my camera and take pictures.  I think part of that was because we were doing what we love best – hanging out as a family, watching movies, and playing games.  It’s what we do best – and we don’t think to immortalize it in photos.

Anyway, have you rented movies from Redbox yet?  We find Redbox quite intriguing and handy.  Intriguing because we’re trying to figure out how that not-so-large box contains plenty of each movie – and how you can return your movies to ANY Redbox location – so what keeps them from running out of certain titles?  Handy because we don’t have cable tv (which, where we live, basically means we don’t have tv), so we depend on Netflix for our entertainment.  But, Redbox supplies those just-released movies that we’re anxious to see.

So, what did we pick to entertain us this weekend? 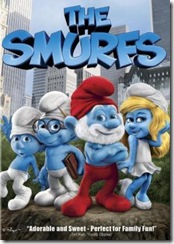 When the evil wizard Gargamel chases the tiny blue Smurfs out of their village, they tumble from their magical world and into ours – in fact, smack dab in the middle of Central Park. Just three apples high and stuck in the Big Apple, the Smurfs must find a way to get back to their village before Gargamel tracks them down. (Rated PG by the Motion Picture Association of America for some mild rude humor and action.)

Our thoughts . . . we loved it so much that, when we returned our movies to the Redbox at Walmar today, we bought our own copy of this movie!  Adorable.  As a person who was not a huge fan of any Saturday morning cartoons (though I did occasionally watch the Smurfs), I must say these little creatures are much more adorable in this movie! 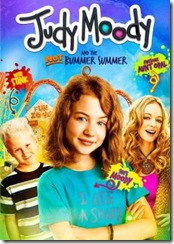 This summer, Judy Moody is planning the most super-duper, double-rare summer vacation ever with best friends Rocky and Amy. Except that it turns out Rocky is going to circus camp to learn to tame lions, Amy is headed off to Borneo with her mom to save a lost tribe and Judy is stuck home with her pesky little brother Stink and second-best friend Frank Pearl. Just when she thinks things are as rotten as they can be, her parents announce that they will be going to California and Judy will have to stay behind with her Aunt Opal, who she’s never even met! It looks like Judy’s best summer ever has just become her way worst summer ever. But feisty, fearless Judy Moody never gives up. With help from some unexpected sources, she’s headed for a summer full of surprises. (Rated PG by the Motion Picture Association of America for mild rude humor and language.)

Our thoughts . . . Glad I rented this one, rather than buying it.  It was ok, but not the kind of movie I’d want to watch over and over again.  Gracie, who has read the books, said lots of it was taken directly from one book or another – which made the movie much more interesting for her. 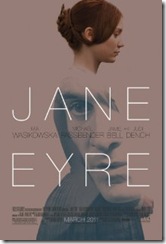 In this 19th Century-set story, Jane Eyre suddenly flees Thornfield Hall, the vast and isolated estate where she works as a governess for Adèle Varens, a child under the custody of Thornfield’s brooding master, Edward Rochester. The imposing residence – and Rochester’s own imposing nature – have sorely tested her resilience. With nowhere else to go, she is extended a helping hand by clergyman St. John Rivers and his family. As she recuperates in the Rivers’ Moor House and looks back upon the tumultuous events that led to her escape, Jane wonders if the past is ever truly past. (Rated PG-13 by the Motion Picture Association of America for some thematic elements including a nude image and brief violent content.)

Our thoughts . . . This one was a disappointment. I was anxious for a new adaptation of the book (which Ashley and I read together last year for school).  This one just didn’t do it for me. I realize it’s a long book and there’s a lot to squeeze into a 2-hour movie; but they just missed so much. I think that, had we not read the book and seen another adaptation previously, we wouldn’t have even really “got” the movie.

Oh, and get this — did you know that, in addition to movies, you can also rent video games from Redbox?  We got to try out Go Vacation for the Wii. 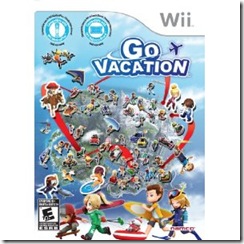 Take a trip to Kawawii Island, a virtual resort for the entire family with dozens of co-operative and competitive activities and events to meet the needs of each and every family member. There’s something for everyone from extreme activities like sky diving, surfing and white water rafting to sports like beach volleyball, skiing and tennis. Want to explore the island? There’s horseback riding, scuba diving, snowmobiles and many different vehicles for travel around the expansive locales. Take some time to relax and play some miniature golf, have a snowball fight, shoot water guns or play some carnival games. Go Vacation encourages parents and kids to participate together in group activities featuring simple gameplay, multiple challenges, hours of play and fun for the whole family! There’s never a dull moment when you Go Vacation! (Rated E10+ by the ESRB for Cartoon Violence.)

Our thoughts . . . Well, let’s just say that Brian, Ashley, and I haven’t had a chance to try this one  because Gracie and Ian have been quite the little game hogs.  The first words out of Ian’s mouth the past  few mornings are “Can I play Go Vacation now?”  Seriously.  I can say this – it’s cute to watch!  You can choose a generic Mii character, or use the one you’ve already got set up on the Wii.  The outfits on these Miis and the settings on the games are really realistic and cute.  It looks a bit confusing for me; but the kids picked it right up, with no problems.  I think it’s a keeper!

So, here’s the rundown . . . Redbox Rocks!  I’d love to hear about your experiences with Redbox.  Any good movies to recommend?  Do tell!

Oh, and here’s some fun information for you – – – Redbox is also hosting a cool contest that your readers might want to know about. The Redbox 12 Days of Deals & Prizes offers daily prizes from December 13 thru December 24. Text FUN to 727272 for instant savings of 25 cents – $1 off of your movie and game rentals, as well as a chance to be entered to win a daily prize from Redbox. Each day, a random drawing will select a winner with top prizes from Sony, Wii, Barnes & Noble, Activision and more.

And the coolest part is the disclaimer – – – I got all this (5 free Redbox rentals and a Wii game that we get to keep and enjoy) from smiley360 – just for trying it out and writing about it on my blog.  Simple enough, right?  You could too – just click on the smiley360 link and sign up TODAY!