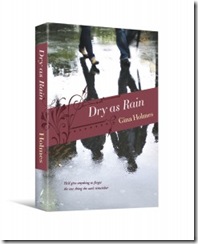 Behind every broken vow lies a broken heart.

When Eric and Kyra Yoshida first met, they thought their love would last forever. But like many marriages, theirs has gradually crumbled, one thoughtless comment and misunderstanding at a time, until the ultimate betrayal pushes them beyond reconciliation. Though Eric longs to reunite with Kyra, the only woman he has truly loved, he has no idea how to repair the damage that’s been done.

Then a car accident erases part of Kyra’s memory—including her separation from Eric—and a glimmer of hope rises from the wreckage. Is this a precious opportunity for the fresh start Eric has longed for? Does he even deserve the chance to find forgiveness and win back Kyra’s heart . . . or will the truth blow up in his face, shattering their last hope for happiness? A richly engaging story of betrayal and redemption, Dry as Rain illuminates with striking emotional intensity the surprising truth of what it means to forgive. 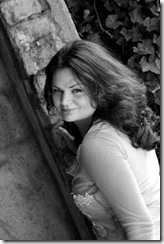 Bestselling author Gina Holmes began her career penning articles and short stories before writing her debut novel, Crossing Oceans. She holds degrees in science and nursing and also runs Novel Journey, the influential literary blog she founded. Gina lives with her husband and children in southern Virginia. Visit her online at www.ginaholmes.com or www.noveljourney.blogspot.com.

Heidi Says . . . Dry as Rain is a very different book from Crossing Oceans.  Gina warned me about that before I even picked up the book, so I wasn’t sure exactly what to expect.

This book is written from a man’s perspective. His marriage is going down the tubes and he decides to have an affair.  The morning after his indiscretion, he finds out that his wife was involved in an accident and seems to be suffering from memory loss.  The doctor recommends not telling her what has been going on – and he plays along with that for awhile.

Eventually, though, his wife pieces things together and things go from bad to worse.  I don’t want to give away the ending; but I will say it was the redeeming part of the book for me.

I have to say that, for me, this book didn’t hold a candle to Crossing Oceans. While that book was a sad story that went straight to my heart, this one was a story of betrayal that just made me angry.

However, while I was disappointed with some of the aspects of this book, I have to say that it was very well-written.  I cannot even begin to imagine writing a story from a man’s perspective, as men seem to think much differently than women.  Gina nailed it! Eric’s character, while maddening at times, was extremely realistic and most obviously a guy!

It will be interesting to see what Gina comes up with next.  I have to say that I’m very impressed with her as an author – to have your first two novels be so extremely different is a pretty amazing feat.  I’m confident that she’ll come up with something great for her 3rd novel.  And I, for one, will be anxious to read it.