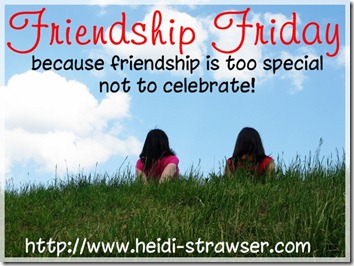 Last week, I wasn’t able to get a Friendship Friday post up about a specific friend – but I did put up a link for YOU.  Thanks to Mike from My Dreams of Disney for being a consistent linker!  He has linked up a friendship post every week since we started Friendship Friday!

If you haven’t started posted about your friends, it’s not too late!  Friendship Friday will be an ongoing weekly meme – until I run out of friends (I hope that doesn’t happen any time soon!)

My Christmas cards will likely inspire me for the next few weeks.  How about you?  Do you get cards from people you don’t get to see much (if it all) throughout the year?  If so, focus on those people – and what they mean to you!  Write a blog post or a FB note and link it up below.  (Make sure you tell your friend!)

One of the things that I love about the internet is that it seemed to make the world a bit smaller.  What I mean is that it’s so easy now to make friends from all over the place!

However, on the flip side, one of the things that I hate about the internet is that I have so many friends who live far away.  Some I never get to see, and some I don’t get to see nearly enough.  Today, I’m focusing on one of those “not nearly enough” friends . . .

I met my friend Melissa back when “all the cool homeschool moms were blogging at HSB”.  Later, we both moved our blogs, but we stayed in touch.  She would often join in the fun of my Destination Disney memes.

A few years ago, we finally got to meet in person – at my favorite place in the world – Walt Disney World!  (Melissa is lucky enough to be neighbors with the Mouse!) 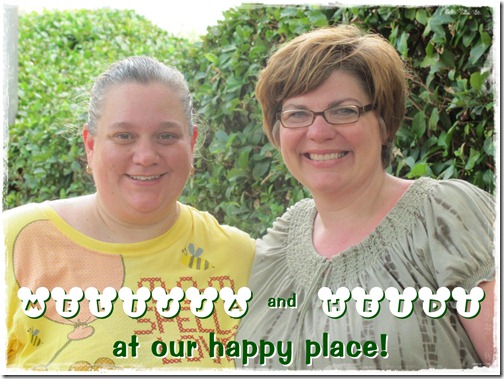 I won’t go into the back-story of that day because I’ve shared the whole “stolen stroller drama” before; but suffice it to say my family was a bit “down” by the time we hooked up with Melissa’s family.  But, we quickly connected and had a great time going through some of my favorite attractions in Future World – The Seas with Nemo & Friends and Living with the Land.  We separated for supper – and then hooked back up with them for a viewing of IllumiNations.  It was a great first time meeting and we knew it wouldn’t be our last!

This past January, we were able to meet up with them again when Ashley and I decided to get some friends together for a Ladies’ Tea at the Grand Floridian.  We were so glad that Melissa and her daughter were able to join us for that special time.

While we weren’t able to hook up with them on our September visit, I know there will be many more visits with Melissa’s family over the years!  Maybe one day they’ll even venture up to PA to visit us!

If you’d like to get to know my friend Melissa better, you can visit her blog – The Life of a Honey Bee.

Melissa – thanks for being my friend!  I am blessed!

I also hope that you spent some time contemplating the friendships in your life and what they mean to you!  Did you decide to honor a special friend on your blog this week?  Last week, we had 2 people link-up with posts about their special friends.  I hope that this week we get lots more!

This week, I’m moving in a different direction, and would like to introduce you to one of my Disney friends . . .

Last spring, I had the wonderful opportunity of becoming a part of the Magical Blogorail.  Honestly, when I first inquired about it, I didn’t know if they would accept me because my blog isn’t “all Disney” (though I do blog about Disney a lot, because it’s so much a part of our lives!)  But, they did!

I was made a member of a new line that was being introduced – the Orange Loop!  Five new members were assigned to that group at the time – each one of them is listed and linked in my sidebar.  Each one of them has become a friend to me this past year.  It’s been so much fun blogging with them about various Disney topics each month.  Each one of them is special and unique and brings her own expertise and fun to the group as a whole!

Today, I want to talk about the only one that I’ve had the opportunity to meet in person . . . Melissa from Disney on Wheels.

We realized that our trips would overlap earlier this year and we’d actually get to meet up at Disney!  I was excited; but, as always when you are planning to meet someone that you have only previously met online, I was also a little nervous.  I mean, you just never know what someone is  going to think of you!  And my family can be a little crazy sometimes!

We first hooked up with Melissa and her hubby at Epcot, but we didn’t really have much time to spend together.  The next day, though, we met up with them again – quite by accident – at Hollywood Studios. 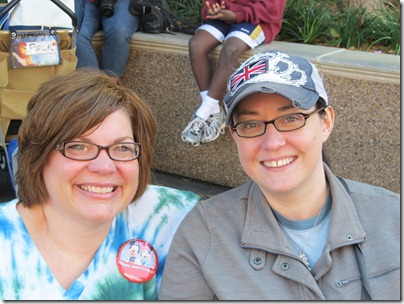 She ended up in line for Rock ‘n’ Roller Coaster with Brian and Gracie!  So, we got to sit and chat for awhile.  (Not long enough, of course, so I’m hoping for a re-do on a future trip!)

Anyway, she’s just as adorable in person as I expected her to be!

A few weeks ago, Gracie lost a bracelet that she had purchased on our September trip.  She was heartbroken!  I knew that Melissa was vacationing at Disney around that same time, so I sent her a message asking if she was still there, and explaining about the lost bracelet.  I asked if she’d mind picking up another one and sending it to Gracie.  The plan was for me to reimburse her (of course).

Well, Melissa went above and beyond!  Not only did she find and purchase the bracelet, but she said she bought it with her AP discount and that I didn’t need to worry about paying her for it.  And then, she said she put it in the mail “with some other goodies”.

Turns out that Melissa was lucky enough to visit during Epcot’s 30th Anniversary.  And she sent us some goodies! 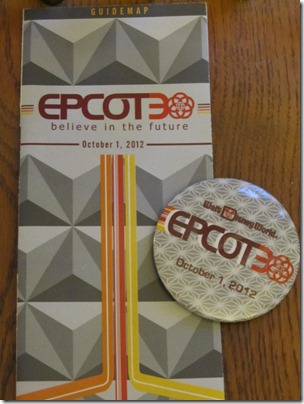 (There were also some of her blog pins in there – which Gracie and Ian scarfed up right away for their pin collections!)

Honestly, I have tears in my eyes while I’m typing this because I often find myself thinking there aren’t many good people left in this world.  But, Melissa is one of the few – and she’s my friend – and I’m blessed!

If you’d like to get to know Melissa too, stop by and visit her blog or her FB page.  Tell her Heidi sent you!

get the InLinkz code