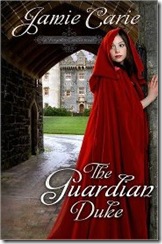 The Guardian Duke is award-winning novelist Jamie Carie’s most exciting story yet, a uniquely arranged Regency-era romantic adventure where hero and heroine know each other through written letters but have yet to meet.

Gabriel, the Duke of St. Easton, is ordered by the King to take guardianship over Lady Alexandria Featherstone whose parents are presumed dead after failing to return from a high profile treasure hunt. But Alexandria ignores this royal reassignment, believing her parents are still alive and duly following clues that may lead to their whereabouts. Gabriel, pressured by what are actually the King’s ulterior motives, pursues her across windswept England and the rolling green hills of Ireland but is always one step behind.

When they do meet, the search for earthly treasure will pale in comparison to what God has planned for both of them. 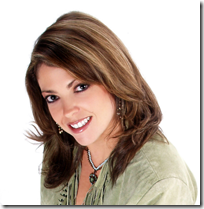 When she was six, Jamie Carie’s parents met Jesus and soon after started a church. It changed everything.

Road trips with her dad—to and from Bible studies across Indiana—were filled with talks of things beyond earth’s bounds – creation and the fall, God and Jesus and the rapture, the earthly walk compared to the spiritual walk, and how we are born for more than what we can see or touch.
The highlight of those nights was stopping at a truck stop in the middle of the night where her dad would spend a little of the offering basket on two slices of pie and a couple of Cokes. Nothing ever felt so special as a middle of the night slice of pie with her dad. And nothing could stop the writing pouring out of her.

As Jamie’s relationship with God grew, she discovered her heart was filled with songs and poetry. During high school she wrote lyrics for her brother’s band. (And she sang them too!) After college, Jamie married, had two sons and decided to stay home with them. While she homeschooled she wrote skits, poems, plays and short stories for school and church. When her eldest son turned five she dove into the world of novels. She’d read romance novels for years, but couldn’t relate to the flawless, saintly heroines in Christian romance novels. So she decided to write her own.

Snow Angel was born on a frosty night in an old farmhouse in Fishers, Indiana, where the cold floor gave plenty of motivation for the snow scene. Jamie loves to write late at night when the house is quiet and the darkness seems alive. Elizabeth and Noah had been playacting in herhead for a long time, so the story went fast. Ten years later Snow Angel was published and won the ForeWord magazine Romance Book of the Year winner, was a National “Best Books 2007” Awards winner, and a 2008 RITA Awards® Best First Book finalist. It was the beginning of her dream career.

Jamie and her husband Tony have been married for twenty-one years and live in Indianapolis with their three sons and a giant of a dog named Leo.

If she could only say one thing to her readers it would be, “Live the dreams God has destined you for!”

Heidi Says . . . this was the first book that I have read by author Jamie Carie.  I really liked both of the main characters – Alexandria Featherstone and Gabriel (the Duke of St. Easton).  Each was very multi-dimensional in personality, and each faced their own set of difficult circumstances.

The book was exciting as I followed each of these characters on a journey – Alexandria in search of her parents, and the Duke in search of Alexandria.  There were some twists and turns along the way for each of them – and I found myself questioning the outcome.

I was disappointed, though, that the two didn’t even cross paths until the very end of the book.  And the book left my hanging – waiting for book 2 in the series (The Forgiven Duke, which is set to release this coming summer).  I will definitely be watching for that book – as I’m anxious to read the next chapter in this story.  I’m sure it, too, will end on a cliffhanger – that will be completed with the final book in the trilogy.
This book can be purchased from Amazon.com.  You can learn more about it by following the Facebook page.

NOTE: I received the book mentioned above for free in the hope that I would mention it on my blog. Regardless, I only recommend products or services I use personally and believe will be good for my readers.