If you’ve been to Disney World several times and have graduated from the more typical Disney planning books, then this book may be just what you need to make your next vacation special . . .

What are Hidden Mickeys?
They’re partial or complete images of Mickey Mouse that are cleverly concealed by Disney’s Imagineers and artists in attractions, hotels, restaurants, shops and other spaces in Walt Disney World – just waiting for you to discover them!

With this book, you can find over 700 Hidden Mickeys in Walt Disney World!  It also contains six scavenger hunts that offer cryptic clues to Mickey’s hiding places.  There’s a hunt for each theme park, plus one for the resort hotels and one for all the rest.  If you get stuck, you can turn to the hints section for extra help.

Using this field guide, you can compete with family and friends.  Score points for each Mickey you find.  Or, you can seek Mickeys on your own.  The complete “Index to Mickey’s Hiding Places” lets you look for Hidden Mickeys where you find yourself in Mickey’s magical realm. 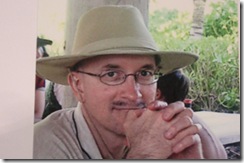 Author Steven M. Barrett paid his first visit to Disney World in the late 1980s, after attending a medical conference in Orlando. He immediately fell under its spell, visiting it twice yearly with family and friends for the next several years, offering touring advice to the less initiated, and reading almost everything written about the WDW theme parks. When a job in his field of emergency medicine opened up not far from WDW in 1998, Barrett, a Texas native, Air Force veteran, and former Oklahoma City medical professor, relocated to the Orlando area from Houston, Texas. He began visiting the WDW parks every chance he got to enjoy the attractions, sample the restaurants, and escort visiting friends and relatives. Eventually, feedback from family and friends made him realize he had better advice on touring the parks than they could get anywhere else. So he wrote the guidebook, The Hassle-Free Walt Disney World Vacation, which includes customized touring plans for adults and teens, families with younger children, and seniors, along with insider tips gleaned from his almost weekly visits to Disney World. He followed it up with Hidden Mickeys: A Field Guide to Walt Disney World’s Best Kept Secrets, a guide in scavenger-hunt format to nearly 500 hidden Mickeys. Barrett continues to visit WDW almost every week, finding the parks and other attractions every bit as magical as they first appeared to him on his first visit over 17 years ago.

This book is divided into the following 10 chapters:

Also included are simple maps of each park.  It should be noted that there are no images (or pictures of Hidden Mickeys) on the pages.  We have very much enjoyed Steven’s column in Celebrations Magazine where, in addition to the great information about Hidden Mickeys and where they can be found, there are also full-color images of the various Hidden Mickeys.

I’ve enjoyed this book – but Gracie has been the one who has taken it and read it through, cover to cover. I’m certain she’ll either take it with her on our next trip to WDW, or make lists of the specific Hidden Mickeys she wants to watch for.  I’d definitely recommend this book for additional WDW Magic!

Hidden Mickeys – A Field Guide to Walt Disney World’s Best Kept Secrets can be purchased direct from the publisher at a discount price of only $9.07. While there, be sure to check out the other Hidden Mickey guides – Disneyland and Disney Cruise Line – or purchase all 3  guides together for 40% off!

NOTE: I received a copy of this book as a gift from a friend.  I was not obligated to write this review – I just like the book and want to share it as part of my series of Disney-themed reviews and suggested resources.  Watch for my review of Steven’s other book – coming to Reviews & Reflections soon.