Last year, I had opportunity to review a product from the K’nex for Education line.  That was all it took to get Gracie (11) interested in – and possibly even addicted to – K’nex!  She has since purchased several K’nex building kits with her own money. And Ian (5) has become a K’nex fanatic as well.  (So far, his favorites have been the Monster Truck building sets.)

When I was asked if I’d be interested in reviewing another K’nex product, I knew I had to say “yes”.  Thing is, though, we had no idea what we’d be getting to review. I figured it didn’t really matter – my kids would love anything from K’nex.

But, boy, were they thrilled when the box arrived and we opened it to find this: 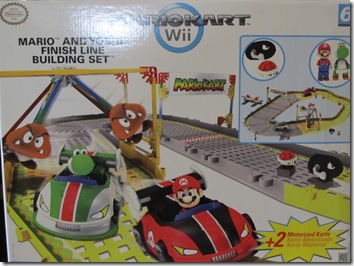 Gracie and Ian made short order of emptying the contents of the box and organizing them to start the building process.  This particular set is for ages 6 and up, so Gracie took the leadership role and really didn’t want Ian to help – but he insisted!  Here are some pictures of the building process: 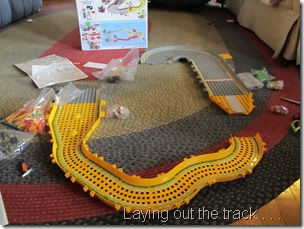 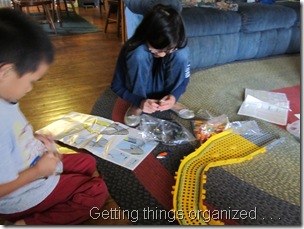 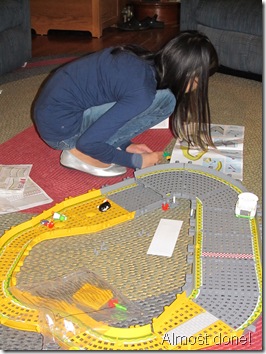 It didn’t take long to get the track together!  Then they were ready to work on the cars: 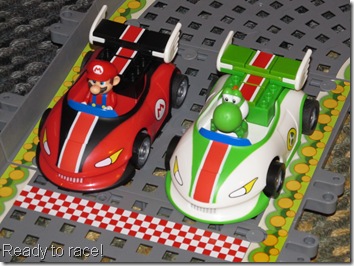 Here’s some general information about this kit from the K’nex website:

Bring Mario™ Kart™ Wii to life! Race Mario™ and Yoshi™ to the Finish Line of the Mario™ Circuit Track. The set includes the parts to build Mario™ and Yoshi™, 2 Wild Wing Karts with super-fast, battery-powered motors, a buildable Goombas obstacle and 2 collectible items from the game: a Red Turtle Shell and Bullet Bill! Also includes 16 pieces of buildable, interconnectable track that creates a closed loop – combine this set with other sets from the Mario™ Kart™ Wii Series to build even bigger tracks!

The kids had a ball playing with this set! I was amazed by how fast the  cars can go!  We have since seen this set for sale in several stores, and  Ian has expressed an interest in collecting more of the sets in this series to add to our track.  This particular set sells for $49.99.  Other sets in the series range in price from $9.99 to $99.99, so there’s something for all your gift-buying needs.  I would venture to guess that most boys would love to find something like this under the Christmas tree!

I have never been disappointed with K’nex products.  They are durable and built to last. Though seemingly pricey, they are both educational and valuable, as your kids will get years of use out of these!

I’ll leave you with a video that we took of the cars moving on the track: