A few weeks ago, I shared that my family and I would be going to the Monster Truck Nationals.  Well, yesterday was the  big day . . . 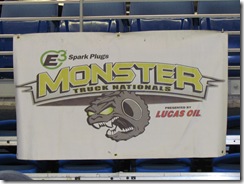 We set out for State College, PA and started our evening with a very yummy supper at the Texas Roadhouse (though it’s not part of this review, might I recommend the pulled pork meal? Delish!) We ate early so we’d arrive at the Bryce Jordan Center in time to participate in the Pit Party. 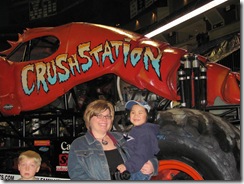 It was pretty neat seeing all the Monster Trucks up close.  I had no idea exactly how big they were.  This picture of Ian and me standing beside Crushstation rather puts their size into perspective.   I’m 5’3” and, as you can see, that tire is almost as big around as I am tall! (please excuse the unknown child who hopped in the shot right as Ashley was snapping the picture!)

Ian thought the Mini Monsters were pretty cool!  This one was made to depict The General Lee, and even said The Dukes of Hazzard on the hood.  This particular truck has a lady driver, and she took the checkered flag later in the evening when these mini-trucks had their race!  Go, General! 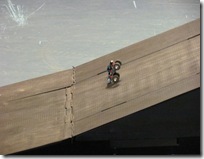 After the Pit Party, we found our seats and waited for the  big show.  While we were waiting, we enjoyed watching the Remote Control Monster Trucks.  These things are crazy-fast!  I think we might need to buy one to play with at home! 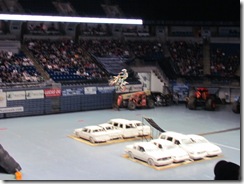 The show started off with the Freestyle Motorcycles.  These guys are CRAZY!  I only got one decent picture.  They don’t allow videotape and that would have been the only good way to capture the fun of these guys.  Let’s just say it’s a good thing I’m not their mother – if I was, I’d be doing a LOT of praying.  Each jump literally made my mouth drop open!

There were Five Monster Trucks in the show.  Each one had a chance at Wheelies – in other words, running over the parked cars. 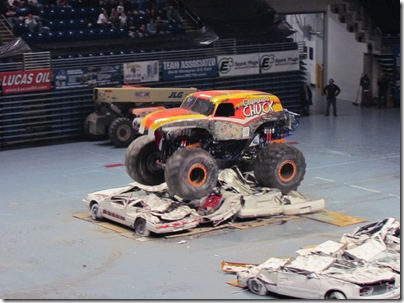 Chalkboard Chuck – the truck that wants YOUR autograph 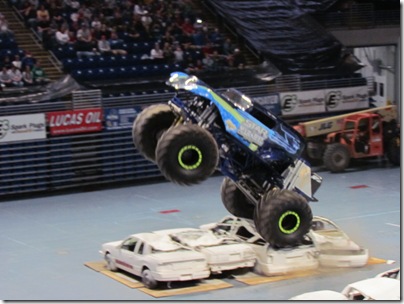 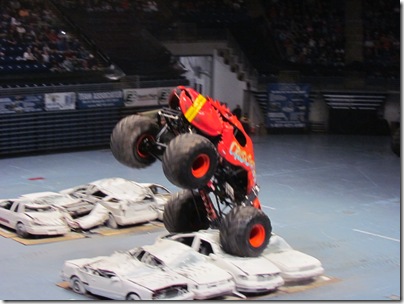 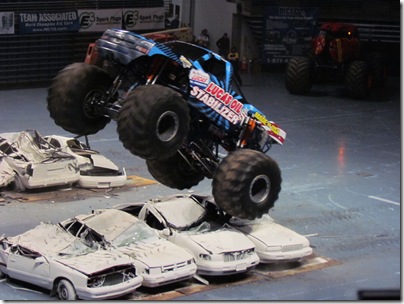 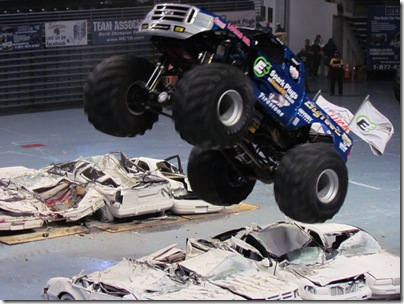 Next on the schedule is the Donut Competition.  Our personal favorite (and apparently that of the whole crowd) was Crushstation.  Check out these donut tracks: 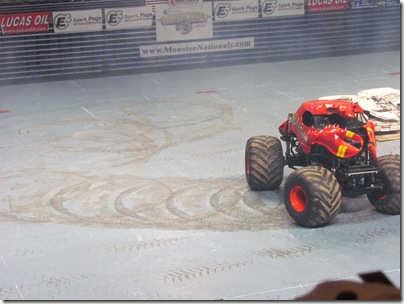 After intermission, the trucks go head to head: 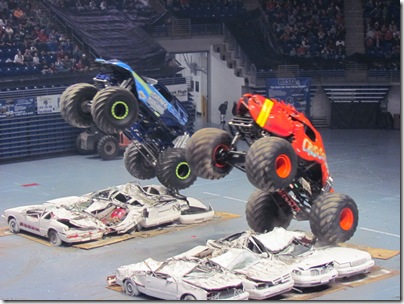 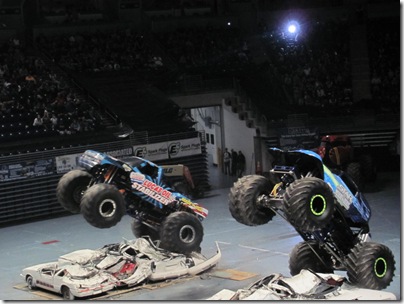 The night ends with each truck having a chance at free style.  We saw more car-crushing wheelies and more fun donuts.  Thank goodness for our earplugs, as there was also a great deal of engine revving during this part of the show!  Bigfoot rounded out the free style section: 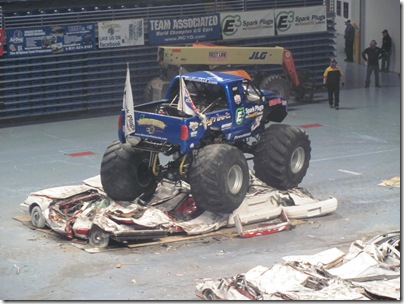 We all really enjoyed this show!  I have to admit, I didn’t go into it with big expectations as I really didn’t think it would be “my thing”.  Surprisingly, I really enjoyed it.  Ian asked when we can go back!

If you get a chance to see the Monster Truck Nationals near you, do it!  It might not be your normal entertainment, but that’s ok – step out of your little box and go have fun!  I did!