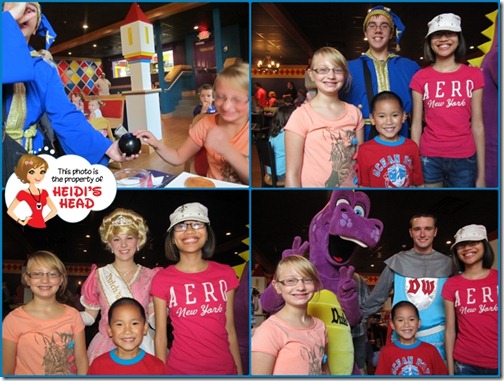 Breakfast consisted of pancakes, scrambled eggs, sausage links, bagels, fruit, cereal, milk, juice and coffee.  One thing that I noticed (that I’ve never seen happen at Disney) was that the food containers were often empty – it seemed like they were having a hard time keeping them full (and there really weren’t that many people there).  The food was kept in large, domed containers.  While they were nice and visually attractive, they didn’t serve to keep the food warm.  The kids, however, got their fill!

During breakfast, the characters make their rounds, stopping at the tables to interact with the children.  We met Merlin first and I was impressed with how friendly and interactive he was.  He remembered the kids’ names and called them by name, which I thought was a nice added touch.  While my kids acted like they were embarrassed to get their pictures taken with the characters, they sure look happy on the pictures, don’t they?!

After breakfast, we set out to find some rides! 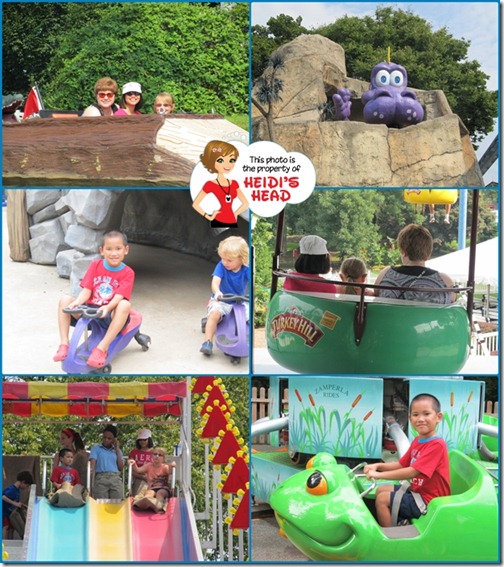 Someone had mentioned to me that Gracie (12) might be bored with the ride variety at Dutch Wonderland.  We didn’t find that to be the case at all.  While it’s definitely more of a park for kids – not teens – I think any child aged 12 and under would have fun here.

Ian (6) is fascinated with the monorail at Walt Disney World, so he was thrilled to see that Dutch Wonderland had a monorail as well.  We stood in quite a long (hot) line to ride.  Problem is, the monorail window are really high (as you can see on this picture (Gracie is over 5 ft. tall now).  The littler kids could see NOTHING from inside the monorail.  I have to admit that, while they didn’t complain, I found that very disappointing! 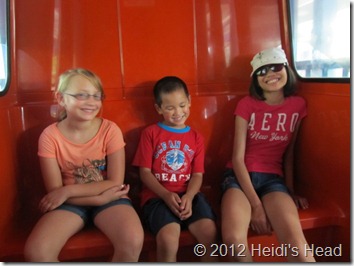 All in all, we really had a great time at Dutch Wonderland and I wouldn’t hesitate to go back or to recommend the park to friends.  Not a thrill ride park (like Hershey) it’s definitely more calm and mild; but there’s plenty of fun to be had.  All the paths are macadam and smooth.  There are lots of trees, so you can duck under them for some shade, as needed.  One thing I would like to point out is that there really aren’t enough benches throughout the park.  We would put the kids on a ride and have to stand because there was maybe only one bench available in that area.

On a side note, if you’re reading this and you sit on a bench in an amusement park, sit off to one side, please.  And if the park is busy, don’t take up room on the benches with your backpacks – they can sit on the ground in front of you.  Seriously, people!  Let’s try to offer some courtesy to our fellow park guests!

What was MY favorite thing at Dutch Wonderland?  Let me show you . . . 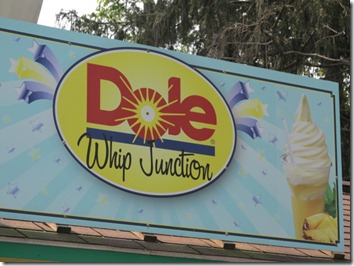 Now that I know that I can get a Dole Whip fix at Dutch Wonderland, I’ll be a lot more likely to visit.  Actually, I wish the Dole Whip stand was located right at the park entrance so I could stop for one every time I head to Lancaster!  Ashley and I both enjoyed Dole Whip Floats right before leaving the park for the day – and it was the perfect ending to our park experience!