A few weeks ago, I posted information about Idlewild Park & Soak Zone and told you how you can get $7 off the regular admission price. Idlewild Park is located in western Pennsylvania, on the outskirts of a neat town called Ligonier.  My family and I had never been there – we’d actually never even heard of that park – but we thought we’d plan a visit while my oldest daughter’s friend was visiting us from out of state.

The park entrance takes you back this “winding dirt road” and you feel like you have to be entering someplace secluded and special.  I was impressed with the payment process – you drive through gates (much like getting on the  turnpike) and pay your fee at the gate.  Then, you simply go find a parking space and head off on your adventure in the parks.  Very simple and streamlined process – I wish more parks would use this method.  (Trust me when I say we’ve stood in some pretty long lines to get park tickets!) 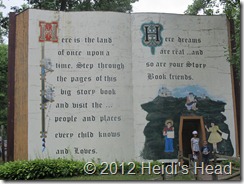 There was plenty of parking and we had no trouble finding a spot close to the entrance.  The older girls set off on their own, while Brian, Gracie, Ian and I decided to explore the Storybook Forest. This was probably our first mistake.

This section of the park is based on nursery rhymes. 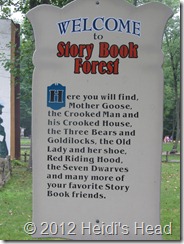 You enter through the giant storybook (in the above picture, you see my kids standing at the entrance).

Our fascination with all-things Disney was pretty obvious here because, well . . . I guess I’ve been remiss in telling my kids the traditional nursery rhymes.  Ian wasn’t familiar with the stories, and Gracie (12) was bored.  We wrapped our way through most of it (it’s a bit of a maze and there isn’t any shortcuts).

This part of the park seems very old.  The paths are dirt and, because it had recently rained, dirt and small stones filled our shoes.  Gracie was constantly asking us to hurry out of there!  On a positive note, Ian seemed to enjoy it. 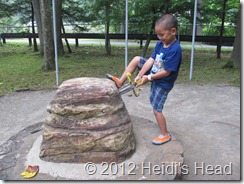 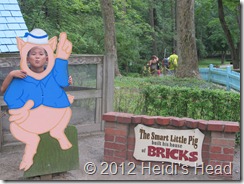 We were there during Christmas in July, so Ian got to visit Santa.  Embarrassingly enough, he told him that he’d like “money for Christmas”.  Oh well. 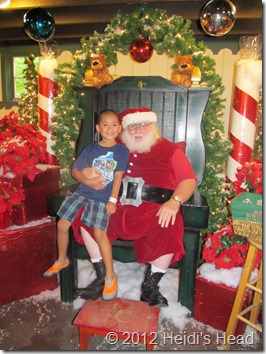 There was a tent set up with Christmas trees decorated in various themes.  You could vote on your tree of choice.  Our retro-loving girl chose the peace-themed one, while I liked the Charlie Brown tree. 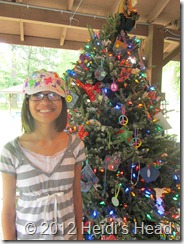 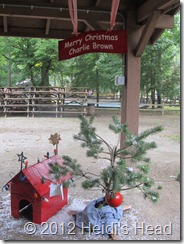 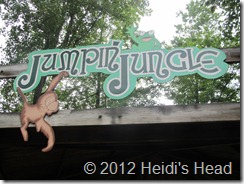 From there, we went to the Jumpin’ Jungle section of the park.  This section contained lots of opportunities for busy kids to climb, jump, etc.  It was actually a perfect place for our active little boy!

Both Gracie and Ian decided to attempt climbing this rope thing: 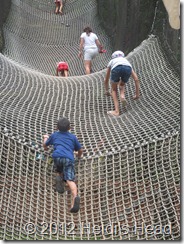 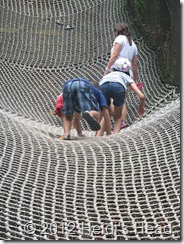 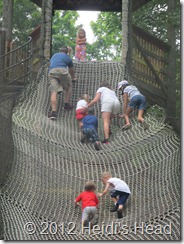 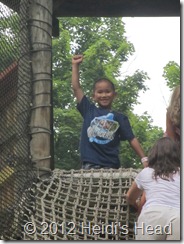 Next on our agenda was to head to the main park, because I knew that Gracie was ready for some real rides.  With the exception of a pretty wimpy water flume ride, the first thing we came to was the Howler.  We all hopped on and actually really enjoyed this ride.  It was very warm that day and the motion of the ride, combined with the breeze, was very refreshing. 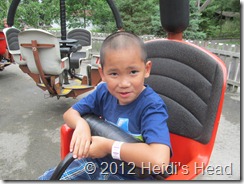 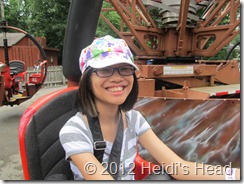 Next, the kids rode the Spider.  We met up with Ashley and her friend Sam who had scoured most of the park and come away disappointed.  It seems that Idlewild is more of a “kiddie park” – there aren’t too many thrill rides for older kids/teens.  And the one ride that they were interested in – the Wild Mouse – was closed the day of our visit.  I told them to try to make the most of it and sent Gracie off with them to explore the park some more.

Meanwhile, Brian and I took Ian to get in the very long line to meet some of the Marvel Superheroes.  Ian was thrilled to meet Spiderman and Hulk.  And I was impressed with the great character interaction.  Since we are so used to the characters at Disney, I must say I didn’t have very high expectations for the character meet & greets at a smaller park like Idlewild.  But the characters spent time interacting with the kids and really paying attention to them.  It made the long wait in line seem not quite so bad! 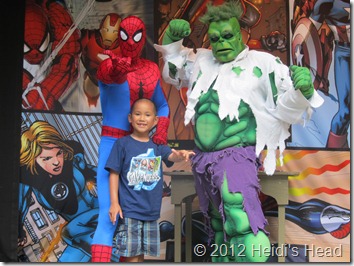 We met back up with the girls after Ian and I took a spin on the merry-go-round.  We got a few more rides in – the Flying Aces and the Caterpillar – before the storm came. 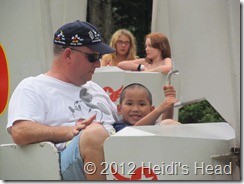 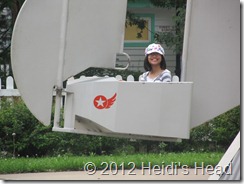 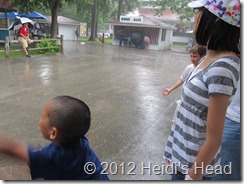 Fortunately, we found a bit of an overhanging roof to stand under – so we didn’t get TOO wet.

According the Idlewild website, I knew that – in addition to the Superheroes – Radio Disney would also be at the park on the afternoon of the 24th.  After the rain, we ventured back out into the park and found them: 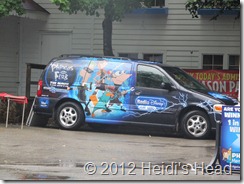 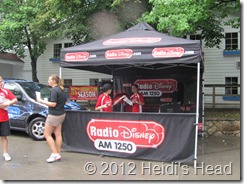 It was fun to see that “little touch of Disney” right there in PA!  They were giving out Spiderman comic books and posters (so Ian was thrilled).  They were also taking song requests, so the girls had fun picking which songs they wanted to hear.

I knew Ian wanted to go back and meet some more characters before leaving the park, but wanted the girls to have some fun too.  So, while they went and rode a few more rides, we went and stood in the line.

We ended up leaving the park much earlier than we had expected – things were wet and the kids were all tired, so we missed several sections of the park that I wanted to see (they have a whole section of the park devoted to Mister Roger’s Neighborhood, among other things).

However, I must say that it was worth the 3-hour trip just for Ian to meet the Super Heroes!  He loved it and the characters were just great! 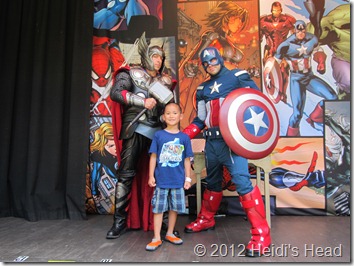 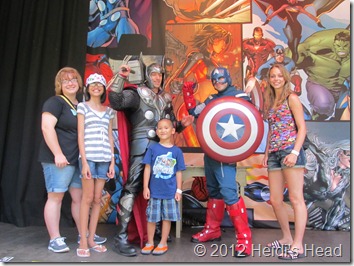 While this probably isn’t a park that we’ll visit often – because of the distance – I’d definitely recommend it to people who live closer and who have younger kids.  If you’re not into the nursery rhymes, skip the Storybook Forest and head straight to the more carnival-like atmosphere of the main park.