We stayed at Port Orleans Riverside for the first time last May.  We loved it!  So, when the time came to plan our next family vacation to Walt Disney World, we made arrangements to stay there once again.  Upon check-in, we were pleasantly surprised with the news that we would be staying in one of the newly renovated guest rooms.  So, now that we’ve experienced both, I thought it would be fun to compare the two.

Upon entering the rooms, the first thing you notice is the beds:

While the headboards remain the same, the bedspreads are very different.  These new ones (right) have a fold-down effect and aren’t made to cover the pillows (I prefer this new look as I like to stand my pillows up at home).  The new beds are queen-sized, as opposed to full-size (yeah!) and throw pillows have  been added as well.

On the opposite side of the room from the beds, the old rooms (left) had a “wardrobe” with drawers on the bottom and a hidden tv on the top.  Beside that was the refrigerator and a bench.  The new rooms feature a murphy-style bed that looks like old trunks.  It doubles as a bench seat during the day, with 3 large drawers underneath.  Above the bed, the tv hangs on the wall, and there’s a nice shelf for storing smaller things (such as those Disney refillable mugs), headbands, etc. The refrigerator is in a cabinet beside the bed, with 3 large shelves beside.

One of the extras that we love about this resort is the curtain that separates the bedroom area from the bathroom area.  It allows for so much more privacy than a regular hotel.  And the double sinks in the bathroom are a lifesaver!  Both of the above pictures were taken in the new room.  I like the shelf area above the sinks.  Below the sinks, it’s open space for storage as well.  (The sinks in the old rooms were pedestal sinks – I like these vanity-style sinks better as they allow for more places to sit things.)

The bathtub in the old rooms was tile, while the new tubs have a wood-like appearance.  Instead of the checked shower curtains, the new rooms have a green shower curtain with fish all over it.  At the back of the tub is a nice wide shelf area; but, other than that, there are only 2 very small corner soap dishes and no bars in the tub/shower area.  I would have preferred a bar to hang wash clothes on and maybe a larger soap dish.

Here’s a close-up of the new beds, showing the way they are made: 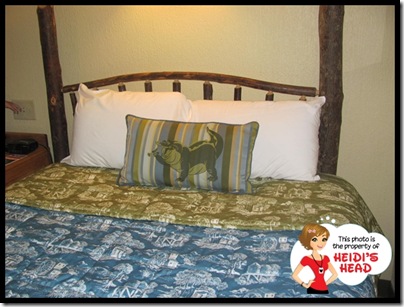 And here’s a picture of the murphy bed, when it’s open: 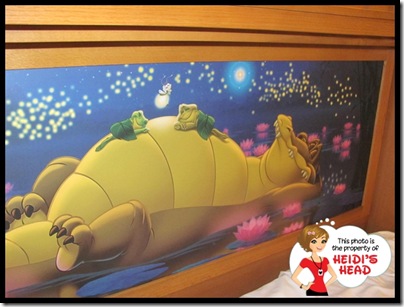 Disney’s attention to detail really shows in these rooms.  We were much happier with the larger (queen-sized) beds.  And the murphy bed was more convenient than the trundle bed (and was a normal twin-size).

While I felt the room was lacking in storage space, I’d definitely go back and I’d recommend Port Orleans Riverside to anyone looking for a nice moderate resort in which to stay.