Are your kids crazy about Silly Bandz?  Both Gracie and Ian have quite a few of them.  So, I thought they might enjoy exploring the Silly Bandz App, now available for iPod, iPhone, and iPad from Zoo Publishing. 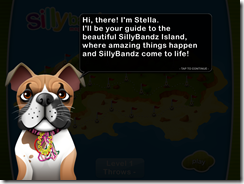 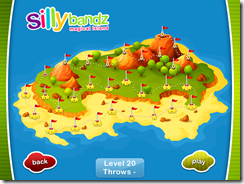 To gather all 40 Silly Bandz shapes found on Magical Island, players must strategically select from the Silly Bandz they’ve collected based on their weight, size and bounciness. As levels become more challenging, Stella the Puppy helps players learn how to use heavy objects to clear a path, harness rockets for a powerful speed boost, or blow Silly Bandz a little bit further by taking advantage of a well-positioned fan. 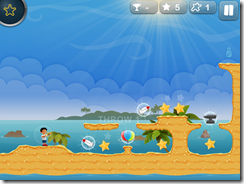 Silly Bandz: The Game for iPhone and iPod Touch is available on the App Store for $0.99 via the link below:

Gracie’s guidance . . . When we first got this app, I thought it was good.  Each level gets a little bit harder, but you do the same action over and over again, just on a harder scale.  I got to the end in only 2 days.  If somebody already own the Angry Birds app, then they probably wouldn’t want to get the Silly Bandz one because they are  very similar.  I’ve not played this game on the DS, but I would like to give it a try sometime.  I think this app might be better for younger kids, maybe like 5-7, because it would be more of a challenge for them.

Ian’s Inklings . . . I like the Silly Bandz game.  It’s a little bit hard for me though.  I think I will be  better at this game when I get to be a little bit older.  {Gracie interjected that it’s a little hard for Ian to determine which Silly Band to use – you have to consider the size, weight, and bounciness of the bands in order to properly play.}

NOTE: We received a free download of this app in order to share our honest thoughts of it here on my blog.  We were not compensated in any other way.