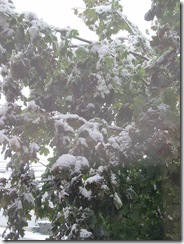 I’m sitting here, at a little after 1pm in the afternoon, drinking more coffee (to keep warm) and this is what I see when I look out my dining room window ===>

Yep, that’s our maple tree.  And it’s barely begun to even change colors for fall.  It’s not normal to see snow on green leaves.  Normally, when it snows, this tree has no leaves on it! 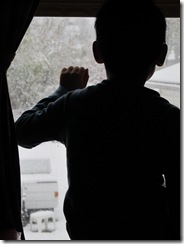 Ian has been enjoying keeping an eye on what’s going on outside.  He’d like nothing more than to get out there and play, but it’s an awfully wet snow – and poor Gracie doesn’t have boots that fit her.

Anyway, this is definitely one of those “stay in the house, drink warm drinks, snuggle up with a blanket and a good book or movie” kind of days.  Which made me think that maybe I should sit and blog a bit . . .

I’ve been telling the girls how I think we need to take one day a week (probably Fridays) and have Counting Down to Disney Parties.  We can watch Disney movies, make Disney plans (even though they’re mostly all made already), and/or make Disney recipes or themed meals. 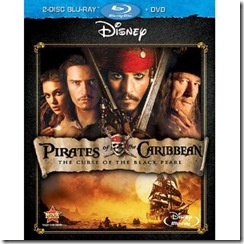 Now, I have to say that I have never seen any of the Pirates movies.  They have never appealed to me in the least little bit – they just didn’t seem like my style.  But, recently, I got it in my head that I wanted to see them.  So, last night, after dropping Ashley off to spend the weekend with a friend, the rest of us had dinner at Friendly’s, then headed to Wal-mart for a few things.  I had a $25 gift card burning a hole in my purse, so (among other things) we picked up Pirates of the Caribbean – The Curse of the Black Pearl.

We  got home late, but the kids and I decided that, since it was a Friday and the snow was coming, we might as well stay up late and watch it.  And, I actually enjoyed it.  We watched it a second time today.  I think I might actually want to see more of them.

So, anyway, I  guess we’ll count this weekend as our first Disney Party – especially since I have a feeling we’ll be watching it again when Ashley gets home.

Now if this darned snow would just stop!