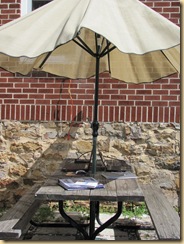 We’ve been enjoying the sunshine the past few days.  It’s been much to nice to hang out in the house, so we’ve even take work outside a few days this week!  Ashley and I set up a little “office” for ourselves.  Even with the umbrella, it was still hard to see the screens on the laptops.  From now on, I think I’ll leave my work in the house, and take a good book outside to read! 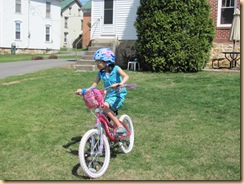 Gracie finally learned to ride her bike – without training wheels – this past week.  She got a new bike for her birthday last summer – and despite lots of practice, she just couldn’t seem to get it.  Now she’s riding like a pro!  She’s even got the bruises on her legs to prove it (and this is the child that has been virtually bruise-free her entire life!) 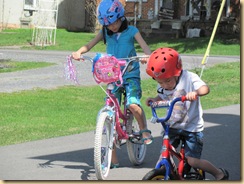 I don’t think it’ll be long until we can take the training wheels off of Ian’s bike too.  The only problem with that is that he pedals really fast but he watches his feet the whole time.  It might be beneficial to watch where he’s going instead!  You just never know what you might run into! 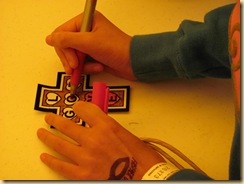 This morning, my mom and I took Gracie and Ian to an “Eggstravaganza” at a local church. 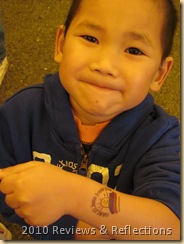 They put up a tent and have various “stations” set up where the kids can do crafts, get snacks, and have fun.  On the left, you can see Gracie coloring a fuzzy magnet craft, while Ian proudly displays his tatoo (right). 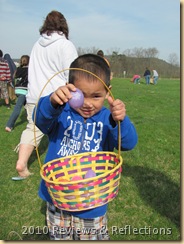 The egg hunts there are a madhouse!  There are SO many kids!  I was literally afraid that the kids would get trampled to death.  But, they wanted to try it. 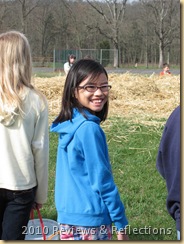 Ian’s age  group went first – they were allowed to get 10 eggs each. He counted his as he put them in his basket – the quickly found us and said “I’m done”.  Sure enough, he had exactly 10!  Gracie’s age group were allowed 12 eggs each – they had theirs hidden under straw.  She got in there, grabbed 12, and got out of there! 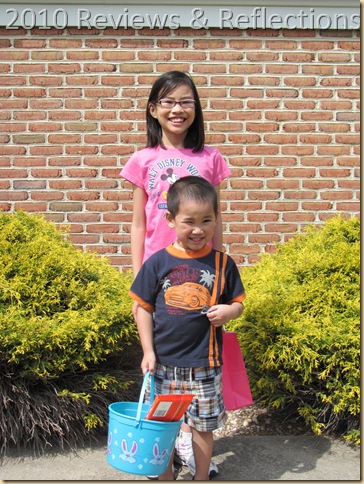 This afternoon, we hit another egg hunt at my friend Sue’s church.  The kids were thrilled with all the candy.  And, instead of chocolate bunnies, they gave out multi-packs of candy bars.  Gracie & Ian both chose Reese’s Peanut Butter Cups (which was good for me – they don’t tempt me!)

Are you enjoying your Easter weekend?  Please leave me a comment and tell me about it!