Last week, I shared a review on a Juvenile Fiction book published by Thomas Nelson.  I received two books from them for review; so after Gracie and I finished the first one, we started in one the second.  The goal was to finish it before our vacation so that I could get the review posted on my blog.  So, here goes . . . 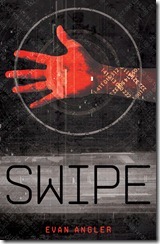 “Apocalyptic dystopian fiction at its best. Angler’s sharp wit and dexterity with political themes are matched only by the thrilling suspense on every page.” —Lis Wiehl, New York Times bestselling author and FOX News correspondent

Everyone gets the Mark. It gives all the benefits of citizenship. Yet if getting the Mark is such a good thing, then why does it feel so wrong?

Set in a future North America that is struggling to recover after famine and global war, Swipe follows the lives of three kids caught in the middle of a conflict they didn’t even know existed. United under a charismatic leader, every citizen of the American Union is required to get the Mark on their 13th birthday in order to gain the benefits of citizenship.

The Mark is a tattoo that must be swiped by special scanners for everything from employment to transportation to shopping. It’s almost Logan Langly’s 13th birthday and he knows he should be excited about getting the Mark, but he hasn’t been able to shake the feeling he’s being watched. Not since his sister went to get her Mark five years ago . . . and never came back.

When Logan and his friends discover the truth behind the Mark, will they ever be able to go back to being normal teenagers? Find out in the first book of this exciting series that is Left Behind meets Matched for middle-grade readers.

Heidi Says . . . To me, the best thing about this book was the quality time that if afforded with my daughter.

That being said, I really have to say that I was not the least bit impressed with this book.  The characters didn’t seem to be very deep.  Of the  two main characters – Logan and Erin – the female character took the lead role in the relationship and treated Logan in a condescending and often downright rude manner.  (Quite frankly, I’ve been seeing this same type of situation portrayed in so many children’s books these days and it’s getting old.)

The book held my interest simply because I kept hoping that eventually we would “get to the point” or I’d find some imagery used that I hadn’t been able to pick up on throughout the story.  We never got there.

The back of the book lists the book at Juvenile Fiction, with the subheadings of Religious, Christian, and Action & Adventure.  While Swipe contained a good bit of action and adventure, quite frankly I saw nothing in it that was the least bit Christian or Religious in nature (with the exception of God’s name being used 7 pages from the end, and not necessarily even in a reverent manner.

I’m glad that I read through this book with Gracie before just handing it over to her.  Not only was I not thrilled with the attitude of the lead female character, but the use of the word “suck” (and it’s variations) was used several times throughout the book as well.

Overall, I just did not feel that there was anything positive or uplifting in this book.

While Gracie liked it enough to want to keep reading through it with me, she was surprised near the end when I said it was a “Christian book”.  She said she hadn’t been looking for the imagery throughout because it just didn’t “sound” like the author was a Christian to her.  (These are the words of my 11 year old, not mine.)

The second book in this series – Sneak – is set to release later this fall.  I wonder if it might be better than the first.