Addy Lockwood’s mother died when she was little, so Addy traveled with her father’s Wild West Show and became an amazingly skillful trick rider, likened by some to the famous Annie Oakley. When her father died, she continued to work with the show, having nowhere else to go.

Now Addy has discovered that “Uncle” Jason, the show’s manager, has driven the show into debt, and he’s absconded with what little money was left. Devastated, Addy decides to try to find the hidden valley where here father had dreamed of putting down roots. She has only one clue. She needs to find three huge stones that look like fingers raised in a giant hand. With Chief, a Sioux Indian who’s been with the show for twenty years, and Micah, the head wrangler, she leaves both the show and a bundle of heartache behind and begins a wild and daring adventure.

If you would like to read the first chapter of Valley of Dreams, go HERE. 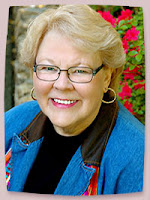 Award-winning and best selling author Lauraine Snelling began living her dream to be a writer with her first published book for young adult readers, Tragedy on the Toutle, in 1982. She has since continued writing more horse books for young girls, adding historical and contemporary fiction and nonfiction for adults and young readers to her repertoire. All told, she has up to sixty books published.

Shown in her contemporary romances and women’s fiction, a hallmark of Lauraine’s style is writing about real issues of forgiveness, loss, domestic violence, and cancer within a compelling story. Her work has been translated into Norwegian, Danish, and German, and she has won the Silver Angel Award for An Untamed Land and a Romance Writers of America Golden Heart for Song of Laughter.

As a most sought after speaker, Lauraine encourages others to find their gifts and live their lives with humor and joy. Her readers clamor for more books more often, and Lauraine would like to comply … if only her paintbrushes and easel didn’t call quite so loudly.

Lauraine and her husband, Wayne, have two grown sons, and live in the Tehachapi Mountains with a cockatiel named Bidley, and a watchdog Basset named Winston. They love to travel, most especially in their forty-foot motor coach, which they affectionately deem “a work in progress”.