ºoº ºoº ºoº ºoº ºoº
I remember my first trip to Walt Disney World.  It was January of 1988.  I was a senior in high school. It was the perfect age to go to Disney (and, since then, I say that every age is the perfect age – even 41!)  At the time, there were only two parks – Magic Kingdom and Epcot.
We loved that trip so much that we came home and immediately started planning for a 2nd trip.  We returned in January of 1990.  By that time, I had my own car and drove down with a friend. We rented our own hotel room and did our own thing.  Hollywood Studios was brand new and we had a blast!
It wasn’t until almost 10 years later that I would have the opportunity to return to Walt Disney World.  In March of 1999, now married with a 5 year old daughter, I once again made the journey from PA to FL – this time with a husband and daughter to introduce to this special place that I had fallen in love with a decade before.
But, much to my surprise, some things had changed.  At Epcot, I noticed some changes – most obvious of which was the lack of Figment!  The Skyway to Tomorrowland was missing at the Magic Kingdom (this, however, didn’t really make me sad, as I’m not a fan of cable-car type rides).  There were several other changes, but the one that stands out in my mind as the most obvious was that 20,000 Leagues Under the Sea was gone.  In it’s place was just this big open, rather sad-looking place where I knew 20,000 Leagues used to be.  I felt kinda sad. 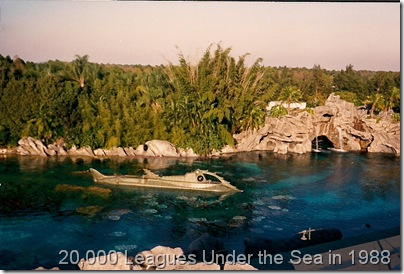 My 5 year-old redhead, though, was pleased that, off to the side of that location was Ariel’s Grotto, where she got to meet and spend some time with Ariel.
Over the years, that location has been home to Pooh’s Playful Spot as well.  Now, however, it is under construction and will be home to the much-anticipated Fantasyland Expansion.
I have to wonder though . . . what might have  been?  I mean, sure the ride may have been a bit dated.  But, who better than Disney to update it with more sophisticated audio-animatronic sea creatures, etc. – the ride could have had such a realistic feel.  Oh well . . . I guess we’ll never know!
I’d like to leave you with this video that I found on YouTube.  You might also appreciate this article on the attraction, found at AllEars.Net and written by Lou Mongello.

I have to admit that the Fantasyland Expansion project has exceeded my expectations and I (almost) don’t miss 20,000 Leagues Under the Sea anymore.  The Beast’s Castle, Storytime with Belle, and Gaston’s Tavern, along with Under the Sea: Voyage of the Little Mermaid – which sit on the old location – are pretty great replacements for this old favorite.

Sure, I still wax nostalgic from time to time, but I’m actually quite thrilled with all the new additions to this area.

*This post was originally part of a Magical Blogorail Black loop, dated October 11, 2011.